Jennifer Daubeny and her son meet their sponsored child

By Bhuvaneswari Mahalingam, manager of sponsorship and partnership development, India 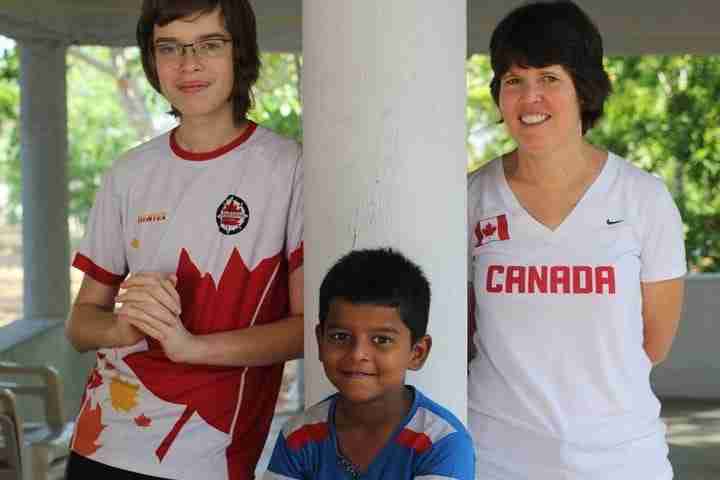 I feel energized. This month, I helped coordinate a sponsor visit between Jennifer Daubeny, a Canadian working in South India, and her sponsored child, Kavin.

Jennifer didn’t make the trip alone. She brought her son, Eric, whom she involved in the sponsorship process from the start so he could understand the country’s rural reality. In fact, after visiting our website, Eric decided which child to sponsor and joined his mom in writing letters to eight-year-old Kavin.

From the start of their visit, I could see a connection already existed between the two families. Mother and son were welcomed with garlands and traditional ceremonies, and Kavin’s mom served mango, remembering it was Eric’s favourite fruit. “I was struck by what they knew and remembered from our past letters,” confessed Jennifer.

It was heartwarming to see how welcoming Kavin was as his sponsor asked him questions and encouraged him. Both Jennifer and Eric were eager to chat with the boy they had built a bond with for nearly two years. They talked about Kavin’s hobbies, favourite food and best subjects in school. Kavin and Eric exchanged views on sports and the difference in climate between Canada and South India.

They had lots of time to spend together. Jennifer and Eric were introduced to the family’s goats and chickens. They also visited a community garden to learn about how it works and saw the early childhood centre Kavin’s three-year-old sister attends. “The community was a good environment, in terms of quality of housing, cleanliness and access to elements such as water, school, et cetera,” recalled Jennifer. “It seemed to be a well-organized environment in which those living there took pride in their surroundings.”

So, as Jennifer’s tenure in India draws to a close, and she prepares to return to Canada with Eric and the rest of her family, there will be memories of Kavin to take back.

“I really did feel there was a lasting connection between us despite our significant cultural and other differences,” said Jennifer. “It was quite emotional to meet Kavin.”

I know all of us — from our local partner, PAD, who helped arrange the visit, to our India office team — felt lucky to be part of this special visit.