How access to water is improving healthcare in rural Ethiopia

How access to water is improving healthcare in rural Ethiopia 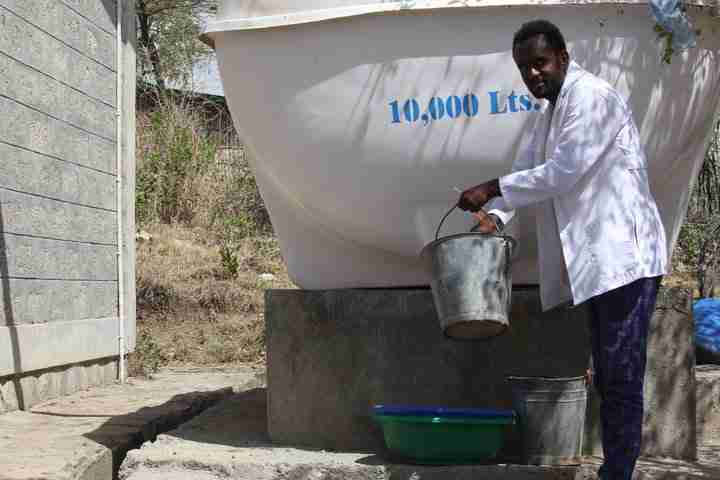 The average person uses 15 litres of water per day to drink, cook and maintain their personal hygiene, reports the “EU Sphere Standards Report” for 2017. Yet, the average water supply was less than three litres per day, per person in Hato Kebele in rural Ethiopia, according to our 2016 field assessment.

In fact, community members were travelling more than 6 km to fetch water, which meant the local health-centre staff travelled that far, by horse (or donkey), to collect enough to support more than 20,000 patients from Hato and surrounding areas.

A water-harvesting tank was what the clinic needed and received, thanks to support through the Canada-Africa Initiative to Address Maternal, Newborn and Child Mortality (CAIA-MNCM) project. The tank connects roof water through waterline extensions to a water tank, which distributes to different rooms in the centre.

Care at the clinic improved significantly. “The shift of the water supply system from horseback to roof[top] has improved the service delivery of the facility throughout the dry season,” explains Semira Mohammed, a midwife working at the Hato Health Centre. “It transformed our lowland to dreamland.”

And, now staff at more health facilities are feeling the same relief, as the project has supported the construction of seven similar tanks at other centres impacted by water shortages.

The new water tanks have preceded the construction of sanitation facilities such as incinerators, septic tanks, latrines and infectious waste containers.

Christian Children’s Fund of Canada (CCFC), through CAIA-MNCM, has also launched sanitation and hygiene campaigns, educating people about the importance of handwashing after using the washroom, personal hygiene and more. Similarly, we’re promoting institutional sanitation practices for waste disposal, which is contributing to infectious-disease prevention.

Before these initiatives began, diseases caused by poor sanitation and hygiene led to sickness and death among children under five, according to district health information records. And many assessments conducted by our partners showed malnourished children often live in unhygienic conditions.

Today, nearly 290,000 people are benefiting from water and sanitation upgrades, especially women who are more susceptible to illness due to unsanitary conditions. In fact, four years after the project began, women now have more time for social and income-generating activities, empowering them to contribute to their community’s growth.

Give the gift of clean water today.