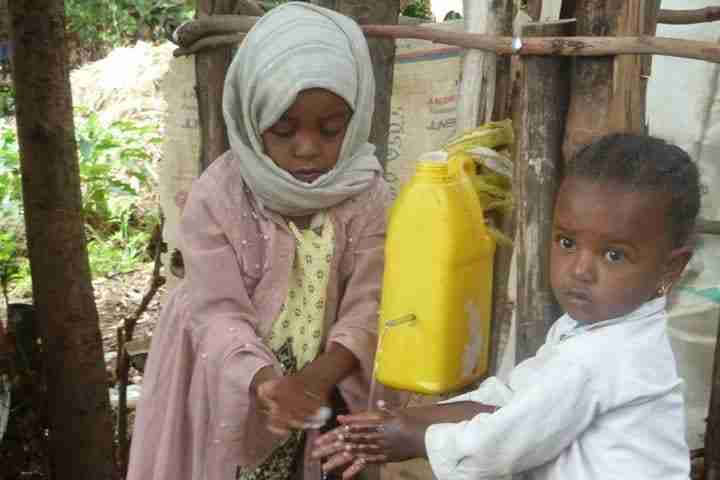 In the Oromo zone, Amhara region villages in Ethiopia, it was common to go to the bathroom in an open field. It led to contaminated water sources, causing diarrhea, pneumonia and worse.

So, Children Believe introduced a community-led sanitation and hygiene plan through its Canada-Africa Initiative to Address Maternal, Newborn and Child Mortality (CAIA-MNCM) project. Supported by the Government of Canada, the initiative focuses on reducing maternal, neonatal and child mortality.

As a result, more than 2,000 women were trained to raise awareness about the consequences of open defecation and spur behavioural change. Hawa Mohammed, a health worker and trainee, was impressed by the approach and determined to find new ways to practise good sanitation and hygiene within an area known for unclean water, poor sanitation, hygiene and a high patient count.

“We held discussions with the community and reached a common consensus of the problem, its magnitude and severity,” she told me. “Then, the community became responsive, and each household agreed to construct and use its own improved pit latrine with its handwashing facility. Water sources were fenced and protected from flood and animals. So diseases related to poor hygiene and sanitation — such as diarrhea, pneumonia and intestinal worms’ — decreased. The villages are now safe.”

Awol Ahmed, a father-of-two, has seen the positive turnaround in his community. “The kids were getting sick too often. The training, organized by Children Believe and the government, has changed our mindsets. I have constructed an improved pit latrine with handwashing facility. It keeps our privacy. Now we have stopped open defecation and wash our hands with soap and water after using the latrine.”

Lubaba Mohammed, a 25-year-old, mother-of-three, still remembers what it was like in town. “The open defecation caused many nasty conditions; during rainy season there was a pungent smell and water sources flooded. It used to expose us to abuse at dusk [because we were more vulnerable to attack]. Though we did not [realize], it subjected us to illness and too frequent health-facility visits.”

Indeed, a lot has changed since then. “Our children are in good health,” continues Lubaba. “[There’s] no more contaminated water sources. Further, the community members of the local government are planning to build a latrine at the women’s marketplace where about 1,500 people gather to barter weekly.”

I’ve seen how good sanitation and good health lay the groundwork for nurturing a thriving community. I can’t wait to see what happens next for Hawa, Awol, Lubaba and their village.

Children Believe works globally to empower children to dream fearlessly, stand up for what they believe in — and be heard. For nearly 60 years, we’ve brought together brave young dreamers, caring supporters and partners, and unabashed idealists. Together, we’re driven by a common belief: creating access to education — inside and outside of classrooms — is the most powerful tool children can use to change their world.

We seek to recognize and remove the obstacles faced by persons with disabilities. All communications are available in alternative formats upon request.
Copyright 2019 - Children Believe. Charitable Registration #10691 8543 RR0001