How are we giving brave internally displaced children a voice so change is possible?

How are we giving brave internally displaced children a voice so change is possible? 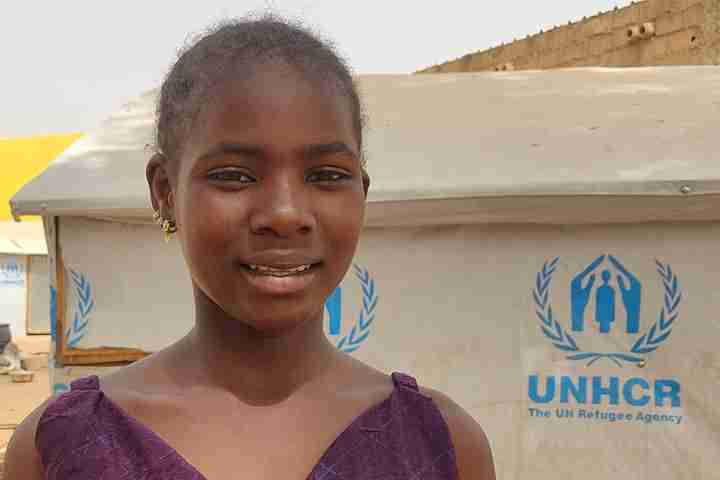 The one-year anniversary of the COVID-19 pandemic has been a big topic of conversation. But, I’ve been thinking about another benchmark year for a tragedy that many may not have caught on the evening news. It has displaced more than one-million people in the past two years, sending them fleeing from their homes in search of safety.

I’m talking about insurgent attacks in the African country of Burkina Faso, which began five years ago.

As of February, the government estimated radical armed attacks are responsible for the deaths of 1,650 people. The same source reports 85 health centres have been closed, excluding 90,000 from healthcare. And, nearly 2,500 schools have been shuttered, locking out 350,000 students. The United Nations Office for the Coordination of Humanitarian Affairs (OCHA) reports 3.5-million people are in need of assistance, which will require US$607.8 million in funding.

The 13-year-old has been living in a camp for internally displaced people (IDP) since she fled her hometown with her aunt (and guardian) several months ago. “I left my home because of terrorist attacks,” she told us, explaining how she was returning home when her aunt and the entire village were leaving, fleeing for their safety. They left with the clothes on their backs.

Alimata is trying to adapt. She helps fetch water and do laundry, hoping her aunt will find food each day. “It’s not like before at home,” she explains. “Since I live with my aunt, I have never seen her asking for food for us until now. Every day my aunt goes to the food distribution site.” Add to that the knowledge that access to toilets are also usually challenging in these camps.

It’s a lot, but this brave girl seems to make the best of her situation, playing with new friends who live near the camp and benefiting from child-friendly spaces hosted by Children Believe and funded by UNICEF.

Alimata, who had never been enrolled in school, has now been exposed to reading, writing and even singing through the child-friendly spaces, and she’s already recognizing the benefits of education and the value of learning life skills to start a business.

Children Believe, with UNICEF’s support, has also helped with the latter. We’ve provided access to life’s essentials through cash transfers and skills-training to benefit a family’s earning potential, hygiene kits, medical assistance as well as psycho-social and psychological support for those who have witnessed atrocities or need support.

Alimata admits that although she didn’t witness acts of violence, she’s afraid, too. “After we escaped … we learned people have been killed and continue to be killed. Others are being abducted. This scares me so much.” But, it doesn’t end there. She has fears in her new home, too. “After 6 pm, I can’t go out anymore, because two of my friends have already been sexually abused,” she shares.

This special girl is highly vulnerable. To reduce her vulnerability a holistic response is required. It needs to offer child protection, clean water and sanitation, food security and education, which must be delivered in a very coordinated way.

We can do this by continuing to listen to the needs of Alimata and other children like her, many of whom don’t have much support from brothers or fathers who were killed or left to find work in gold mines or other regions.

Despite the overwhelming life challenges Alimata is facing, I am struck with how the desire for learning has been awakened in her. Regardless of their circumstances, children want to learn; education is essential to Alimata’s well-being — it’s her right. The question I’m grappling with is how can we can facilitate greater access to quality education for even the world’s most vulnerable children creatively, effectively and sustainably?

Even as I write, I’m aware the project that provided learning and joy to Alimata through child-friendly spaces is complete. Of course, the work isn’t done, so we’re committed to securing further support in the area and where other support is needed.

We’re also preparing to respond to a request for proposals from the Government of Canada for multi-million dollar projects aimed at providing education for refugees and displaced children and youth in sub-Saharan Africa. This opportunity is possible, thanks to the influence of the Canadian International Education Policy Working Group of which Children Believe is an active member.

This situation is not easy. Lives change in an instant, but solutions take much longer.

As I sit here looking at this photo of Alimata, I realize she may have felt unsafe at home for nearly half her life. Now she shares a makeshift roof with 15 people in a new community. I still see hopeful eyes smiling back at me. As a global community, we have a lot of work to do to help her and her peers. Thankfully, we can start learning from her today. I know I have.