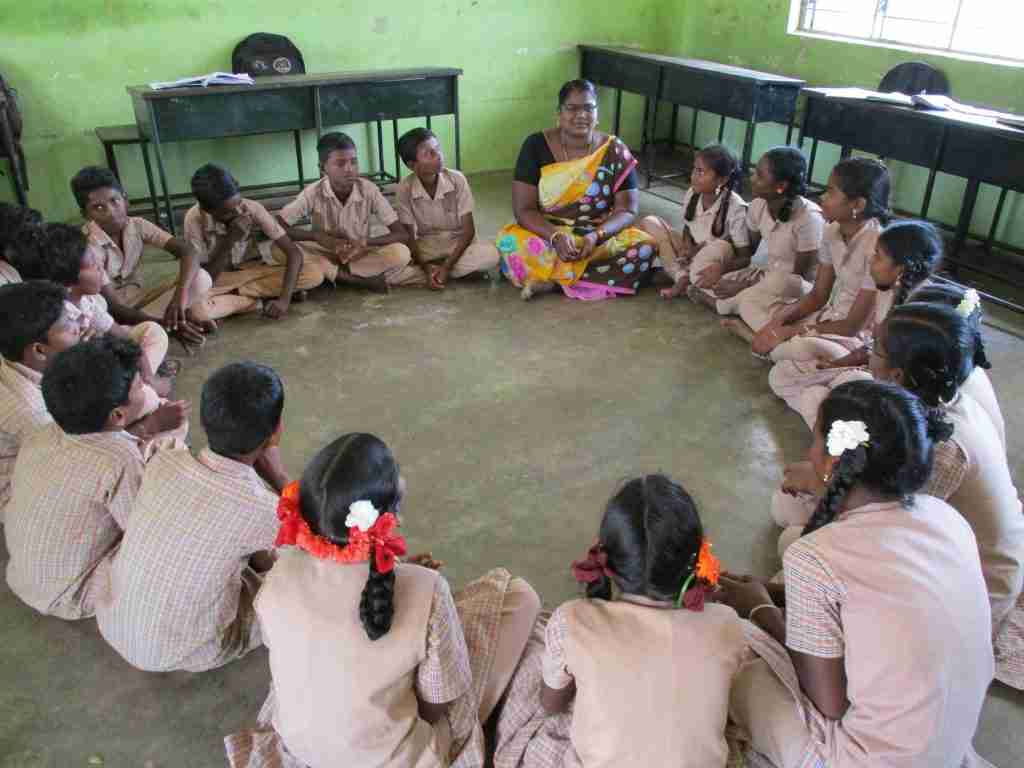 Good community leaders are essential to the healthy development of rural villages around the world. Just ask the children and youth from one small town in India who’ve benefited from the support of one such person.

In this case, that leader is Thenmozhi. Born into a poor family from a low caste (class), she studied hard, reaching Grade 12 with dreams of one day helping to eliminate caste discrimination. And, despite obstacles she faced as a low caste member of society, she grew up to become an active member of her community and was unanimously elected leader of the Village Development Committee (VDC).

Deeply invested in the position, the mother-of-three volunteered at after-school programs Children Believe implements and took part in a series of child-centred training workshops provided through our program. They equipped and enabled her to make an impact in her community.

In fact, the chance to make change came quickly. She heard 18 children from the lowest caste dropped out of a school they attended outside their immediate community and started working, following mistreatment by their upper-caste peers who would not sit with them, called them names and isolated them. Meanwhile, the teachers also discriminated against them. She knew she had to do something.

Thenmozhi, with support from her VDC, raised the issue with a government representative of the public school, who made it possible for the children to re-enrol.

But, the leader’s support didn’t end there. The school-management committee appointed Thenmozhi an educational volunteer for one year, paying her an honorarium. She spent the year coaching the 18 children she helped so they could join age-appropriate classes. As a result, the teachers at the school made remarkable behavioural changes, learning to treat all their students equally, respecting and encouraging them to participate in school. It was clear the 31-year-old volunteer made a significant impact on children and adults alike. And, she wasn’t ready to stop helping others.

Next, she joined meetings organized by Children Believe to learn more about the government’s social security and welfare system. Later, she organized a camp to share her learnings with low-caste communities. In the end, nearly 100 families received family ration cards to access groceries, Aadhaar cards to access government and banking services as well as voter identification numbers.

Talk to members of her community, and you’ll hear more stories of Thenmozhi’s kindness and concern for vulnerable children and their families.

Thenmozhi has helped women find jobs, so they could feed their children; and she made it possible for a nine-year-old to undergo a free heart surgery at a government hospital. That child is now thriving and back in school.

The human-rights advocate is proud of what she’s achieved. “I was a housewife, before I established contact with Children Believe [and its local partner IRCDS],” she told me. Today, she’s grateful to supporters for making it possible for her to reach her dreams and help people reach theirs, too.

Sponsor a child today, and help them access an education, so they can grow up to make lasting change — just like Thenmozhi