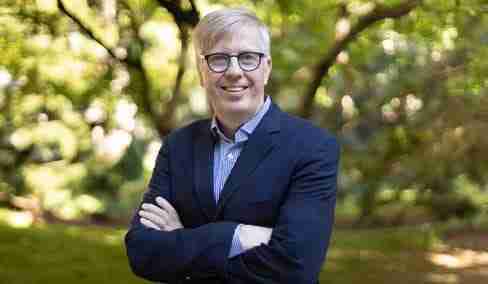 It’s great to be home — back in Canada — after working abroad for 12 years. I’m no stranger to virtual work, so sitting in my living room, computer on my lap, won’t slow me down, even if it’s an unusual way to start as CEO. Making connections is a core value that drives me, and that purpose remains a priority.

Through my work in places like the Rohingya Refugee Camps in Cox’s Bazaar, Bangladesh, I learned if you deeply believe something is right, even if it’s very hard to do, you’re prepared to do what it takes to do it. I still believe that.

So, I want to share more about me so you can get a better understanding of how we’ll work together to break barriers to education so children can dream bigger than they imagined.

To start, I come to Children Believe after years spent living abroad — in Kenya, Pakistan and Bangladesh — leading programs in countries practicing various faiths, facing complex geo-political situations. I preceded that challenging, yet satisfying work, with another job that was very different and yet similar. I spent 17 years building and growing an inner-city church in Toronto.

That’s the short version of the story, but I thought it would be easier to answer a few questions I’ve already been asked to fill in some gaps. Check them out:

Why did I transition from working as a pastor to working in international development?

As a pastor, I saw how a community’s social issues deeply impact a community’s success. In Toronto’s Jane and Finch neighbourhood, where I pastored, we had high numbers of at-risk marginalized youth. So, we developed a community program that reached them with support from an international youth worker who came to Canada as a refugee. When his application to stay was rejected, we mobilized a nationwide advocacy campaign so he could continue his important community work with us. The noise it made reached the Prime Minister’s office and Parliament. I realized I could use the skills I learned in urban ministry on a much wider platform.

What has international development taught me about our world?

The role community contribution has in creating a successful society was reinforced in my mind. This is as true for you and me as it is for the people around the world who you and others like you help. Communities share their resources and others add to it. It’s a partnership.

A woman I recently met, whose son benefited from a sponsorship model, explained it best. She told me she wanted to meet her son’s sponsor to thank him for acting like another parent who came alongside to help provide what she couldn’t — until she could. She did it by starting a small business, which grew, thanks to local support.

What’s my hope for the kids Children Believe helps?

I hope they break barriers holding them back and grow their dreams beyond what they ever thought possible, in ever-growing numbers, beyond expectations. I admit, it’s not easy.

Imagine a girl who has to bust through a barrier — such as attending a school without adequate toilet facilities — when she’s also discriminated against for her low-caste (or class) standing and minority religious faith.

The good news is positive change is possible. I’m in awe of what children are capable of when we believe and invest in them — when they feel safe and protected and are given permission to dream bigger. Those kids are not only inspiring (and fun) to be around, but they also challenge leaders to make the world around them better.

We have to be there for these kids. We have to make a difference.

So, I hope you’ll continue to join us through this journey. It’s time to tell their story. It’s a great story, and we’re thankful you want to be part of it.

Check back monthly for my blogs. You can also click here for my complete bio. Now that you know more about me, let’s keep connected. Email me at the address above, and let me know a little about you and why you support us. Until next time.